Last evening was chaotic and with all the events rolling around in my head my night was pretty restless so I thought it might be a little therapeutic to take time to blog this morning before work.  No worries we’re all fine, it was only a community meeting, but it did get me thinking about how grateful I am for some of the wonderful people I know.


In January one of those “repost things” was floating around Facebook.  I never do those but this one intrigued me.  You commented on the post and the person would make you something handmade this year.  You then had to repost and make something for the first five people who commented on your post. 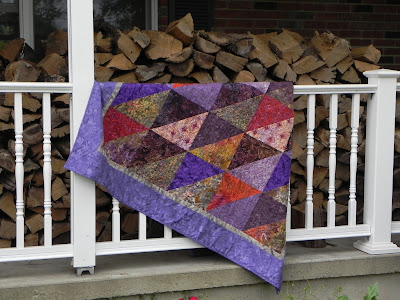 So the quilt in my last post was my first completed project for this challenge.  After it spends some time in the shop it will go to our old neighbor, Kim.  Kim and her husband are wonderful and it was such a blessing to live by them for a short while.  They were both Purdue alums with masters in child development.  While we were there they had their first child, a girl who is a couple years older than Linus.  Whenever I get frustrated as a parent I think back to Kim and her husband.  I admire their patience and calmness as parents.  It often seemed every word or action was deliberately thought out.  They were constantly teaching their little girl about the world around her whether through including her in the conversation, discipline, or even just chores.  I’m not sure I had ever closely watched someone do this with a child under 2. (I have a younger brother and sister, but when I was 8 I really didn’t care about this kind of thing.)  Kim was actually the first person I told when I was pregnant with Linus besides Adam of course.  I’m not sure why but, we were playing with chalk with her daughter and I just blurted it out.  Kim taught me or maybe rather reminded me in tough or frustrating situations to step back breath and collect yourself.  I don’t know if she realized she taught me that, but after all, “Actions speak louder than words.”   To me Kim personifies the idea of leading by example for her daughter and for everyone around her.


I often times make Christmas gifts for people but let’s face it I’m usually finishing up the last of them in January.  Making a gift for a specific person in the middle of the year has allowed me to think about the art of gift giving.  Kim is also a photographer and the purple batiks in this quilt remind of some of the beautiful nature she photographs.


My challenge to you is this month start a project for someone in your life you maybe wouldn’t normally give a gift to but has meant a lot to you.  It doesn’t have to be anything big, but believe me it won’t just fill their heart, but also your own.


Posted by Always In Stitches at 8:02 AM

Always In Stitches
Noblesville, Indiana, United States
At Always In Stitches, located in Noblesville, IN, you will be surrounded by only the best fabric, yarn, notions, and sewing machines. You can have your machine serviced or your project quilted, all while enjoying the comfort of good people, and great products.